Woke up yesterday morning to hear someone on the BBC Today programme seriously suggesting that we should weaken nuclear safety standards to make atomic power more affordable.

It was in a segment (starts 50 minutes in) pegged to the continuing woes afflicting Hinkley Point C.

To recap quickly, the finance director of intended plant-builder EDF Energy resigned on Monday. Why? Well, he judges Hinckley C’s financial prospects to be so dire that they’ll sink his company if the project goes ahead. And that’s in spite of vast taxpayer subsidies, a guarantee of extortionate electricity tariffs and that ‘we saw you coming’ price tag of £18 billion – half the bill for HS2 for one power station.

The air is tremulous with the sound of huge bets going massively wrong. The bet on unlocking loads of (some … any?) domestic natural gas via fracking. The bet on a ‘friendly’ gas pipeline from the Gulf – a bet that’s a big reason for the desperate brawl tearing up Syria. The bet that nuclear power might ever provide affordable AND SAFE base load electricity.

As unpalatable situations go, this one is up there with a decomposing frog sandwich. Procrastination, wishful thinking and willingly doing the Neocons’ bidding have got the UK exactly where you’d expect. Which is:

Now, we know the BBC could no more allude to a state of affairs in which Plan A exists than it can ever come to terms with its high-level culpability for the long reigns at Broadcasting House of Jimmy Savile and other molesters of the airwaves.

That leaves the option of selling – sorry ‘examining the issue of’ – Plan B. So with the first hour of Today rapidly closing in on the weather, Sarah Montague introduced a ‘nuclear specialist’ to discuss the ballooning price tag for Hinckley Point C. What, she asked, Malcolm Grimston of the Centre for Energy Policy and Technology, makes it so costly?

”It is a big plant. It is going to generate 7% of our electricity. But nonetheless what we have seen is, as safety system is piled on top of safety system, this has become enormously complex as well as having a vast number of pumps and valves and the like associated with that.”

Right, ‘pumps and valves and things like that.’ Easily explains why Britain’s next nuke could cost, what, £20 billion allowing for the inevitable overruns.

OK, let’s forgive the shaky start. Doing live radio can be a tough gig at ten to seven in the morning.

Mr Grimston had another run at explaining why nuke safety has got out of hand and ought to be reined in to keep the price down:

“Given that the safety record of nuclear power is so extraordinarily good – I mean a single accident in the whole of its history that has had health impacts off site – I’m sceptical as to whether this is really the way forward,” he began.

Woah! How do you jumble up the letters F-U-K-U-S-H-M-A and C-H-E-R-N-O-B-Y-L and come up with ‘extraordinarily good safety record’? 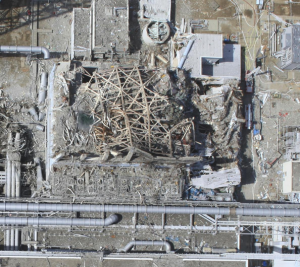 Had Today introduced Mr Grimston as what he is, that is a career-long PR person and advocate for the nuclear industry, this would have been the moment for the presenter (note the term) to go for his attempted spin like the Beast of Aaaaarrrrrrggghhh savaging Sir Lancelot.

Instead, apparently for the benefit of not-quite-awake-yet listeners, Montague fed him a neat summary of the pitch he was there to sell:

“So are you saying that we should remove some of these layers of safety to ensure that the next generation of nuclear plants are built?”

“Well I think you have to reach a level of safety – which I think we have reached in the nuclear industry – whereby the chance of an accident is extremely small. But we learnt from Fukushima that, actually, the health effects of nuclear accidents are not the radiation – nobody, certainly off site, and probably even on site at Fukushima – is … we’re not going to be able to detect anybody dying as a result of radiation … the evacuation has killed an awful lot of people.”

Oh dear, oh dear, oh dear. It’s so easy to do. I know I have. A friendly ‘presenter’ lobs you a ridiculously soft ball just before they cut to to the weather and you not only fluff it, you end up mangling your message until it looks like the shredded, bloody leftovers from lunch with the Rabbit of Caerbannog.

DON’T MENTION FUKUSHIMA. Yes, no-one’s (yet) apparently been killed by radiation there. But many people died during the emergency evacuation of nearby settlements carried out to avoid exposure to escaping radiation. And two clean-up workers have died of heat-induced heart attacks at the site under the strain of working in full-body radiation protection gear, including masks and helmets covering their entire heads.

Grimston’s claim that “we’re not going to be able to detect anybody dying as a result of radiation” stretches credibility to the absolute limit.

(Sigh). It’s surprising how many take-aways can come out of a two minute slot.